It was a clear and cool March day in Georgia, just perfect weather to exercise my 17 year old Arab mare. After a good brushdown, i turned toward the arena with lead rope in hand. Oops, I felt a tug. As I turned to see why my mare was hesitating to follow me, the lead rope slipped out of my hands as my mare did a rapid backwards gait, fell back on her rump then rolled on her side. Sheimmediately jumped up and attempted to canter off in a stiff-legged manner (I assume her survival instincts took over and she wanted to get away from whatever happened to her). She eventually stopped and gave me a bewildered look. “Uh, Ok” I thought, what in the heck just happened?  Any recent changes quickly reeled through my mind as I tried to figure out why she may have had such an odd reaction. She had never reacted this way in the fifteen years I had owned her. 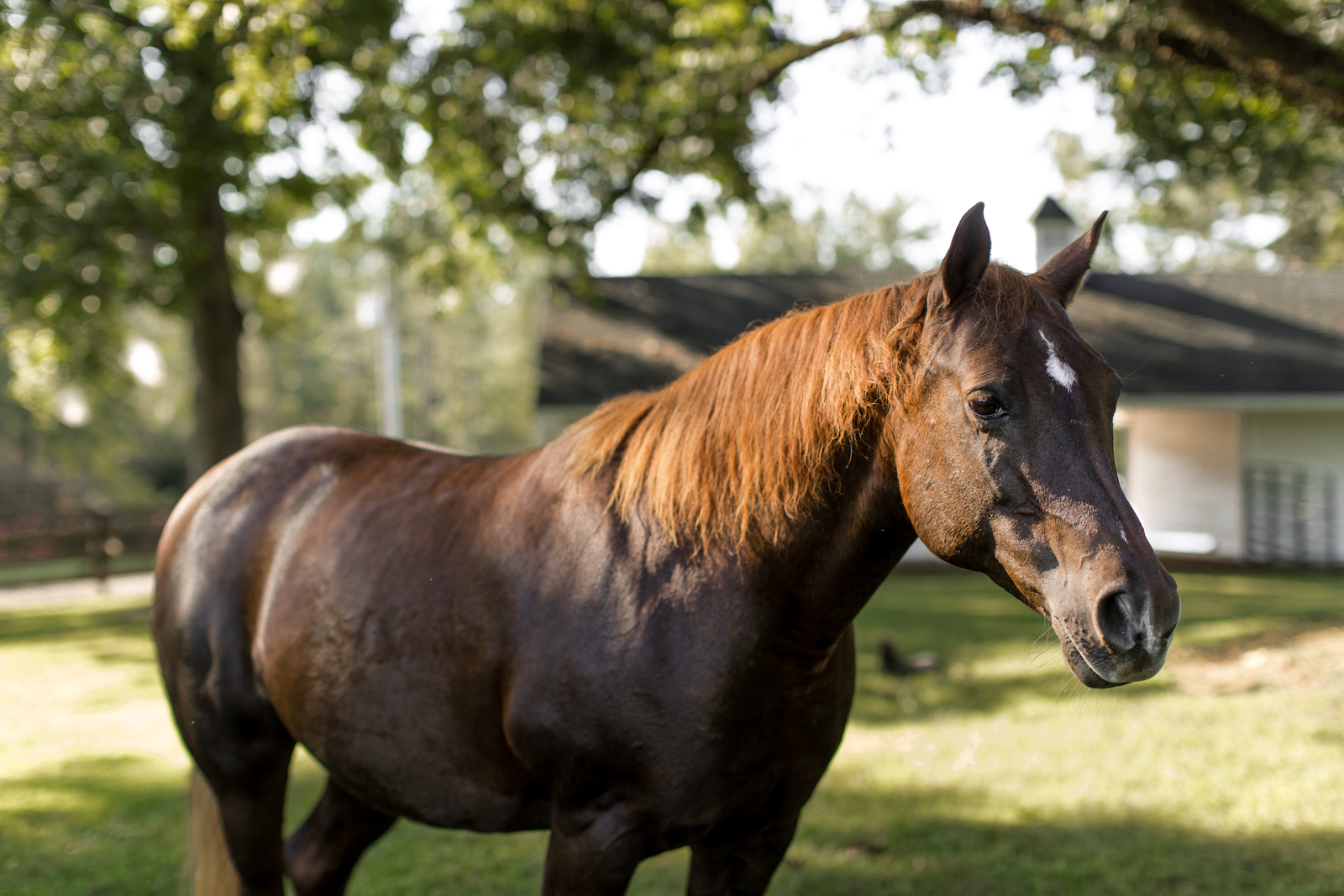 Was This a “One Time" Thing?

So, I began trying to put together all the pieces, trying to understand the situation better.  It's true we had recently moved to our new farm so there had been a change in her environment, but for the better I think. I had bought two goats and she had a new three-year-old pasture colt for a companion. No feed changes and no trauma I was aware of. Although, I had noticed she was somewhat distant in her demeanor and not her usual lovable self.  I had attributed that to the changes in her herd since leaving the boarding facility we had been at for six years. My sister, who is a nurse, had described her as having ‘dead eyes’ once, but I felt that was a bit severe for a description. Plus my sister was not a horse person.

I left a message for my vet and decided to give my mare the day off. When the vet and I spoke, we discussed every possibility, but without my vet seeing the episode there was not much to do but wait and see.  It didn't take long for this odd episode to occur again. It was about three weeks later as I was, once again, starting to work with her in the pasture. For no obvious reason she threw her head high in the air, began a fast backwards gait, fell on her rump, then her head and finally rolled over all four legs in the air and then to her side. “Oh my gosh” I shrieked, “I am watching my horse die before my eyes!”  Have you ever seen a 1,000 lb animal fall over? It’s disturbing to say the least. She then struggled to her feet, released a big poop pile and stood still looking stunned. This time I assumed it must have been a seizure of some kind?

When I brought her back to the barn to check her out she was already tender on the side of her face that took the impact. There was even mud packed into the small holes on her halter. “That was some fall you took girl!” I spoke softly to her as I continued to evaluate any other injuries. I immediately called my vet, who then agreed a visit to Auburn University was in order for a neurological evaluation. She mentioned the Auburn vet was hoping I could get a video of another similar event. What? Video? Really? First of all both episodes happened so fast and I don’t go around with my phone on camera ready. Certainly I had no intentions of trying to initiate one of the scary moments either.

Getting to a Diagnosis

A week later we were able to get to the University. The equine staff was tremendously courteous and helpful. They allowed me to be a part of most all the examinations. They kept her overnight and gave her a full blood work up, CT scan of her head and x-rays of her neck. When I arrived the next day I was given a partial answer. The Internal Medicine Vet assured me they could find no neurologic issues, although she did have some cervical osteoarthritis which was normal for her age. “But,” the vet continued, “she is an EMS candidate and positive for PPID”.  Say what?  In other words she was not metabolizing her food efficiently and she had Cushings.

I had heard of Cushings and seen pictures of horses bearing the telltale signs of this disorder. But my horse didn’t show any obvious signs, or did she? I needed to go home with my discharge orders and prescription for Prascend® and a thyroid medication and mull over this diagnosis. As I reflected over the last months, there indeed had been some changes. For example, I noticed she was not losing any weight despite a full time grazing muzzle and evenings in a stall on limited hay. It was early Spring and her coat was not shedding out with the usual zest. The biggest change was her attitude. I thought about the ‘dead eyes’ my sister had mentioned. Indeed my overly social mare was spending more time alone and not eager to share horsey kisses or hugs. I had rationalized that my mare was acting odd for other reasons, certainly not the long wavy coated, sway backed horses I saw in some Cushing’s photos. (Below are post and pre Cushing's photos of her. You can see the lack of engagement in her face in the second photo.  She was much more engaged in the Christmas photo. As I spoke to my vet further she assured me PPID was something my horse would pass away someday with, not from. I thought this was a very important distinction and was grateful for that perspective.  But getting her weight down to a normal range and getting her on medication was crucial to her staying healthy and not incurring any additional effects Cushings can have on a horses well being.

Did I feel better finally getting an answer? Not really. We still didn’t have any reason for her neurologic episodes and the Cushing diagnosis sent my head spinning. I scoured all media for any and all information on PPID or Cushings. Unfortunately there isn’t a clear cut answer for the ‘why’ behind this disorder. It just happens.

These are some of the most important facts that I gathered.  From Kentucky Equine Research- https://ker.com/equinews/equine-cushings-disease-back-basics/

So What Do We Do From Here?  Is there a Medication?

The medication, Pergolide, is a Parkinson's drug the FDA pulled from the market in 2007 marketed under the name Permax and as generic as a result of persuasive evidence that it could lead to heart valve disease.  Pergolide was already being used for years in horses with Cushings and the recall caused an uproar among veterinarians. Worried that pergolide in any form may ultimately become unavailable for the treatment of Cushing's, Eleanor Kellon, VMD, gathered 4,800 signatures on an online petition urging the FDA to help find a solution to the supply problem. Kellon estimates that more than 10 to 20 million 1 mg doses of pergolide are needed to treat the country's Cushing's horses every month. The FDA  did agree to a compromise: It would exercise "enforcement discretion as appropriate over the pharmacy compounding of pergolide,". In 2011 Boehringer Ingelheim created pergolide tablets called Prascend®.*August 2007 issue of EQUUS magazine.

Cushing's is not an inexpensive venture. Prascend® is costly approximately $2+ a tablet no matter where you attempt to purchase it (U.S. or Canada)My mare is on one tablet a day. I have read where some horses are managed on as little ¼ tablet. Vets can conduct various tests available to determine the amount of medication a horse will require. Please see: https://ahdc.vet.cornell.edu/docs/equine_cushings_tests.pdf

Also additional supplements may be needed to support body function (i.e. Vitamin E, supportive herbs, etc) and low starch feeds can cost up to $50 a bag. So I have made the choice to forgo the purchase of frill items for me (new clothing, shoes, etc) or eating out on a whim, to help offset her medication costs.

The good news is that my mare’s social and sweet personality has been restored: it took about three months on Prascend® to see her return to ‘normal.’ I also have a sure ‘test’ of her mood, I ask her for a ‘kiss’. If she’s having a good day she gives one willingly and on her off days she just doesn’t care to engage. I do my best not to treat her like a porcelain doll. She needs engagement and exercise to stay fit and Cushing’s is not disabling if caught early enough and treatment is started.

Age is a process and a fact of life. My sweet mare and I are aging together and we will do it gracefully as long as it is in my power to afford us both the luxury of the best care possible. My advice from a novice at this is please do not ignore the signs or messages your equine friend is sending you. Denial will only delay treatment while the disorder progresses. The final word on Cushings or PPID is that there is no way to prevent it from occurring. There is speculation that it may be connected with age, stress or obesity, the latter two are good to try to avoid in general. But for us now, it is what it is. With early recognition and intervention, you and your equine friend can still live happily ever after!

"My name is Nancy Fitzgibbons and I am a featured blogger for GoHorse.com. I've been a horse enthusiast for many years.  After a career in the pharmaceutical industry I have "retired" to farm life and pleasure horses. Just as much hard work, yet more fulfillment than ever."