My name is Nancy Fitzgibbons and I am this week's guest blogger for GoHorse.com. In my early years, every summer was spent on some breed of pony in a daily adventure that usually ended once-a-month in me being dumped in a south Georgia ditch. The High school era was barrel racing and trail rides on a Quarter Horse-Thoroughbred mix mare. After college I spent 25 years selling, traveling and career chasing with pharmaceutical and biotech companies. Today it is farm life and pleasure horses. Just as much hard work, yet more fulfillment than ever.

The media has given Hurricane Michael much coverage and credit for the horrible devastation of the Florida Panhandle. Certainly, those affected deserve the attention. Yet no major media outlet is talking about South Georgia farmers, horse farms and residents spurned by the massive winds, rain and spin off tornadoes.

How do I know this? Because my mother and I drove right through a South Georiga farming community the morning after the hurricane where we have an active livestock and crop interest.

The Family Farm is a Part of Us - Not Just Land

This farm began in 1940 with my mother’s family on a 40-acre tract. It grew into a successful 400 acres of crops, timber and livestock. My mother and her siblings were raised with 100-year old oak trees and barn and house constructed with hand-hewn local wood. They picked up arrowheads that surfaced behind mule and tractor drawn plows through rich loamy soil. It was hard daily work being raised on a farm and success came at the whim of the weather. In those early years weather forecasting was handed down through experienced elders and the Farmer’s Almanac©.

The emotional attachments and passion for the land ran deep in all those raised on the farm. Every tree, ditch, dirt road and old abandoned wood frame home held a personal recollection.

My mother has wonderful memories of the farm and her childhood. Pot-luck community dinners under the  pecan trees, sliding off the tin barn roof onto a pile of hay, hours of swinging on tires attached to ancient oak tree limbs. The uncertainty was growing as we traveled towards this place of memories - what would the impact would be on all of these things?

Can you, for a moment, close your eyes and feel the emotional attachment you have to an object? Then open your eyes and see that object uprooted and destroyed! That is exactly what my 84-year-old mother and I felt as we turned off the four-lane highway onto the road to Blakely. Devastation!

Staying Behind to Weather the Storm

Before this story continues, let me clarify that my father was still on the premises. We begged him to leave with us, but he refused. He felt that the hurricane path would not be a direct hit to the Lucille community, and he insisted he had been through hurricane winds before. The last time we had spoken with him was 12 a.m. right before he lost all electricity, water and phone service.

The morning after Hurricane Michael we briefly spoke to Dad on his cell phone on our way to the farm - he was unharmed, thank God.  “There is no power, the well is gone and the phone is dead. It is still dark and I can’t quite tell how bad it is outside. I am a nervous wreck!” He sounded exhausted.

As we turned off the four la 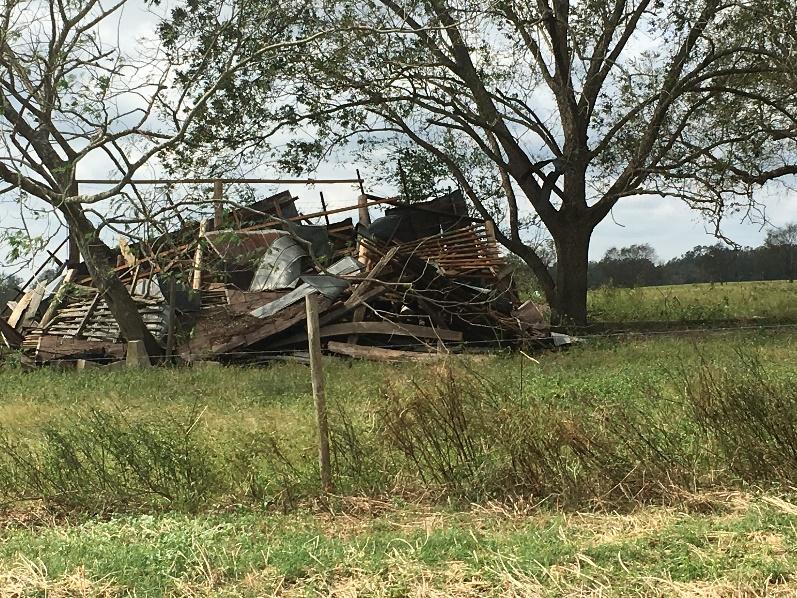 ne highway to enter town, a Sheriff officer standing on the corner waved us to stop. “There is a curfew until tomorrow morning”, she stated,”Where are you going?”. After we explained we were headed toward Lucille she replied “Good luck getting there, and please be safe”.

As we drove through the outside of town to get to the road to our property we saw power lines down everywhere! Some trees limbs had already been cleared off  the road just enough to drive around, other trees were laying on power lines that we had no other option but to drive over.

The amazing thing to witness was that some homes were hit hard while others seemingly untouched. I learned that apparently a hurricane can create spin-off tornadoes as it moves through an area and nothing is spared if your property is in the pathway of one. Mounting anxiety grew as I thought about of our farm enduring the same fate as what we were witnessing. I thought about my 31-year-old Thoroughbred race horse that peacefully passed on earlier this year. She would not have survived this event. Already my father had relayed to us  that the donkeys were missing from the same pasture she was in next to the house. My thoughts were for other horses in the area, did they survive or were they wandering about like our donkeys?

Besides fallen trees there were fields of unpicked cotton with piles of white blooms pelted by rain beaten into the soil and not much left on the plant. A complete loss. Any other unharvested crop received the same fate as the cotton field, a total loss to the farmer. It was expected to be a bumper harvest for 2018 due to the plentiful rains. Did  farmers or hay producers have insurance?

As we approached our property we stopped to chat with neighbors we saw outside. Everyone had a look of shock on their faces. This was a first-time event for Early County lifelong residents. As we turned the corner and saw the initial devastation to our farmstead, mother gasped, “Oh my gosh!”. Her face turned ashen and I could tell this was almost too much for an 84-year-old veteran of the country life.

A Whole Community in Shock

As we pulled to the back of the main house, there was my father standing on the porch, leaning on the railing. He was shaking his head. “I just can’t believe it” was all he kept saying.  As we walked about assessing the impact, mother stopped, reached down and began picking up pecans from the toppled trees she had grown up with as a child. “We must not waste these wonderful pecans”, she said.  As I looked into her face, I realized she was in a state of bewilderment. She was not prepared for what she was witnessing.

It was very difficult to see the  structures and trees from my mom’s childhood stories so impacted. For example, the tin barn roof built by her father, the same one she slid down as a child, was laying in strips on the ground. The pecan and oak trees that shaded pot-luck dinners and supported tire swings were lying prone, roots and all.  It was like viewing the death of a treasured remembrance- you just don’t know what to do or where to start - so my mother started by picking up pecans. 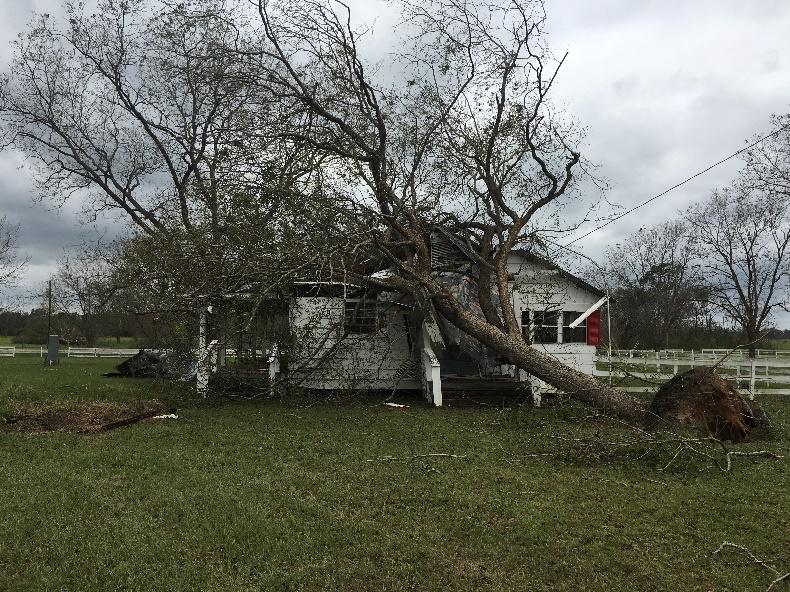 At this point we realized since there was no water, electricity, no generator and no estimate of restoration we would insist on my father returning north to Newnan with us. The freezer contents were already thawing, so we spent most of day trash bagging all perishable items. After securing water and food for the yard cats and dog, we headed north to begin the process of emotional and physical recovery.

When we were able to speak to relatives in the area, the same response was common- “Devastating”, “I have never seen anything like this”, “We are in disbelief and depressed at the horrible effects”, “We will overcome this and continue”, “Reality hit us this morning when the sun came up!”.

There are stories of neighbors offering food, blankets and assistance, such as washing clothes  to out-of-state powerline workers. Local professionals that suffered destruction to their property came to the aid of residents by restoring wells and tarping roofs within just a few days. Humanity at its best!

The true impact of Hurricane Michael to this local community will take months to truly determine. The town square had  successful existing businesses experience collapsed roofs and ruined merchandise. Will they have enough settlement funds and energy to start over? Farmers and ranchers  will need to determine if they can continue to engage bank loans hoping for a better outcome next season. My cousin is a Southern Paper Mill retiree who also owned a small mobile home park to augment his income. Two homes he owned and rented  were completely destroyed. “I am not sure how I am going to recover from this” he commented. The stories are as sad as the destruction.

I know life will carry on. The clean up and repairs will come and it will take time, but the beauty of the land will be restored. The land will never be the same and we, in some ways, will never be the same either. It will be a matter of time and courage for recovery. As Winston Churchill said,” Success is not final, failure is not fatal: it is the courage to continue that counts.”