Do You know What Your Farrier Does for Fun on the Weekend? Hint: It May Involve Explosives! Do You know What Your Farrier Does for Fun on the Weekend? Hint: It May Involve Explosives!

A Surprising Discovery About my Farrier

“You do what?”, my mind’s voice shrieked? The image of my handsome young AFA Certified Journeyman Farrier on his white stallion in the Montana wilderness rescuing the damsel who almost got eaten by the big bad bear was just shattered. “You know, all of us farriers are just a bunch of knuckle-dragging mavericks” he continued, as he slapped his rasp back on the hoof stand magnet. “I have never been at one of those shoots, but I know all about them” he says. “But Nick”, I pleaded, “Why on earth do you want to do that?”  He leaned back on my mare and said “Ahh, something fun to do I guess. A bunch of us get together and think, hey, we deal with dangerous situations daily; big powerful and sometimes fractious horses, hot fire, big hammers, sharp nails. Why not have fun with it”?

Not a Sport for the faint of Heart

As he continued his work, my mind began pondering what he just told me. I knew it was time to warm up the computer and find out more about ‘anvil shooting or firing or blowing or flying’. He interrupted my thoughts as he continued, “I know some of the guys would pool in some money and put a bet on where the anvil would land. They mark their spot and go stand there after the fuse is set. Whomever the anvil lands closest to gets the money”. Maybe I am too old and too wise or just too old. I would never put myself anywhere near where a flying 200lb hunk of steel may land.  As Nick continued work on my horse’s hooves, he relayed to me the complexity of the formula to get the explosive impact that launches a 100-200 lb piece of steel high in the air. The more he talked the more curious I became. 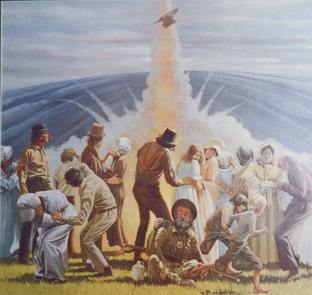 Anvil Shooting as a Celebration in Our History

What I learned is that anvil shooting has deep historical roots in this country. Anvil Shoots were used to celebrate our nation's Independence, Christmas, the New Year, and Davy Crockett's inauguration into the United States Congress.  Early settlers fired anvils in hopes of making the Indians believe the noise was cannon fire. In the early days, many small towns had no bells or cannons with which to warn or assemble its citizens, but almost all towns had a blacksmith, and he would have anvils. The blacksmith would shoot the anvils to draw the townspeople together. According to legend, when the Union armies marched through the South, they wanted to take out their enemy’s capability to work metal. 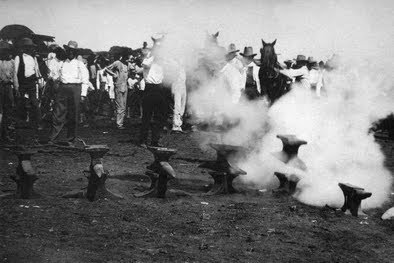 To do that, they would place gunpowder underneath their anvils and light it with a fuse.  Once the powder blew, the anvils would go rocketing into the sky, rarely coming out in any sort of decent shape.  (*FAQ -Acme Anvils)

I asked Nick, “Aren’t anvils expensive? Why would you want to damage one with gunpowder?”  He laughed at my naivety. “Oh no, we don’t use our $1,500+ anvils, just the cheap ones”. Cheap can be just a little over $100. That sounds more expendable. 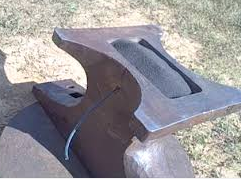 So, I continued, ”How does it work?” I think he was intrigued by this gray-haired ladies interest, so he gave me more insight. “Well, to keep it simple for you, this is what you do. You get a steel anvil at least 100 lbs. One can use up to 2 lbs. of black powder to launch their anvil.  There is a hollow spot beneath the top anvil, about the size of a notepad, and is where the powder goes, along with a delayed action fuse. Obviously you run before it goes off. The ‘explosion’ results in a launch that often reaches more than 100 feet and is cool to witness. If you're competing you want your anvil to go the highest and land closest to the launch point. If you're involved competitively there is a  form of shooting called ‘Super Modified’, for those that think 100 feet just isn’t enough. Competitors make their own anvils, customized to reach greater heights - sometimes as far up as 500 feet or more.” 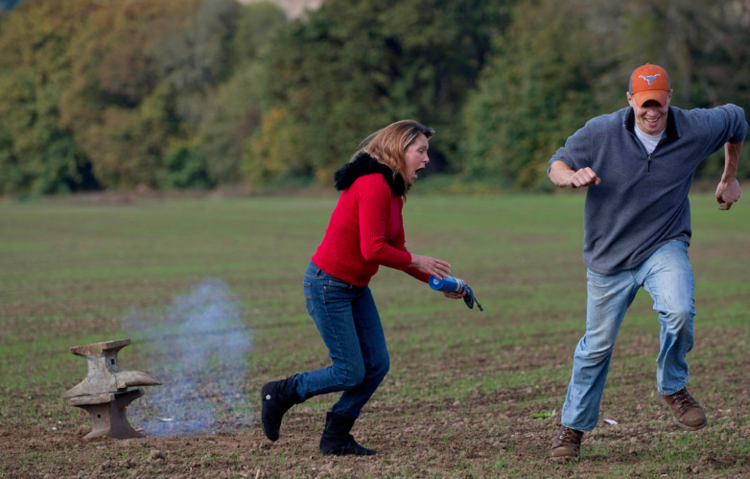 This event has even drawn media attention. Gary Wilkerson, a resident and former mayor and country commissioner in Farmington, Missouri has been ‘shooting’ anvils since 1995. He has been featured on The History Channel (Only In America) and a CBS news special.

But Don’t Those That Play With Fire Get Hurt?

Although I have read that anvil shooting can be very spectacular, if not done correctly there could be disastrous consequences. That being said ABANA (Artists Blacksmiths Association of North America) banned all anvil shoots at any of their sponsored functions based on an injury. I read where some have lost fingers, been shell-shocked and airlifted to hospitals.

The Washington University of Emergency Medicine posted this article on their web page in 2016*. A 13 y.o. male was firing an anvil when it hit him.

In this case,  the anvil hit the boy in the chest and he arrested at the scene. His father who is a firefighter did CPR and there was return of spontaneous circulation.  The boy sustained severe injuries including a small intraparenchymal hemorrhage, bilateral pulmonary contusions with a mediastinal hematoma, an aortic valve injury, an open clavicle fracture, bilateral arm fractures, and a finger fracture.

Yikes! I must add though, that all sports are dangerous. I have had broken bones from my horsey accidents and a horse weighs much more than an anvil. Safety is key in all form of sports, especially if it involves gunpowder.

There Must Be More To This?

As I continued my web-surfing for more info, there unfolded something else to these ‘knuckle-dragging mavericks’, they are artists! Blacksmiths, when not playing with gunpowder, or hot shoeing horses can create some beautiful things. 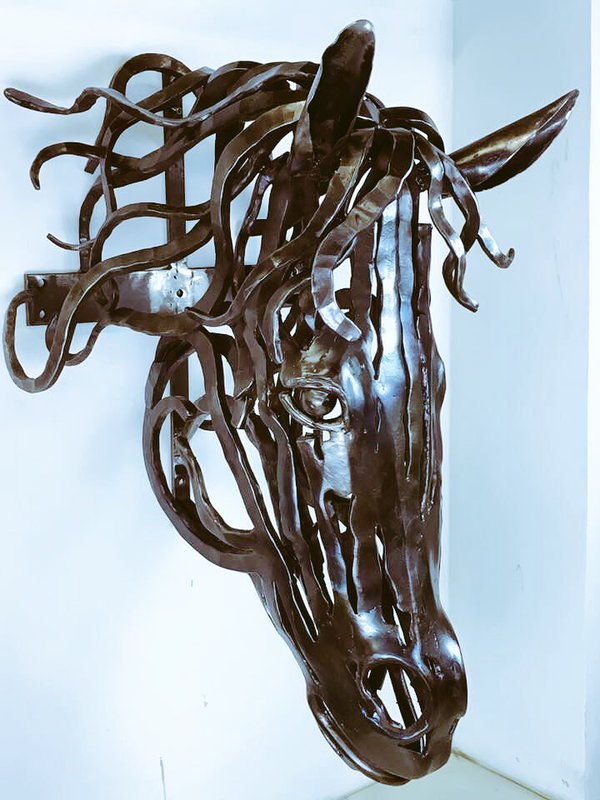 There is a direct descendant of Daniel Boone (yes the historical Daniel Boone) who is a blacksmith artist. No surprise Dan Boone is his name, Daniel Boone VII. He and his wife Judy host a yearly event at their forge in Louisa, VA. Besides the anvil shoot, there are blacksmith artists and fun for the whole family. It draws 300 or more people. This year it will be held on February 23, if you are interested.

Dan and his sons are generational blacksmiths. Their families works  can  be found at Biltmore Estate in Asheville, North Carolina.

If you would like to learn more there are a couple of books on this talented family (The Boone Blacksmithing Legacy by Don Plummer and Boone Wrought Iron by Dan Boone and Don Plummer) or you can visit Dan’s son’s website  (www.booneshooks.com).

A sigh of relief as I visualize my young farrier getting back on his white stallion. He is a marvel to me now, instead of a maverick. Anyone who can play with fire and red hot steel to create such beautiful works of art, whether a horseshoe to fit a specific need or a beautiful sculpture can blow up anvils in my back forty anytime. The only caveat is I will be watching from a remote camera!